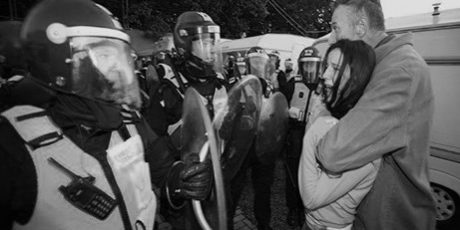 The following gives an overview of the latter stages of the 10 year long struggle to halt the eviction of eighty families resident at Dale Farm, Essex.  The eviction went ahead on 19th October 2011.  The article itself has no conclusion – I would have liked to write that the eviction caused such outrage that legislation was passed to ensure that such displacements could not be repeated but sad to say ten years on little has changed in the methods used to evict or move on Gypsies and Travellers from their own or contested land.  Indeed with the introduction of the Police, Crime, Sentencing and Courts Bill the current Westminster Government is moving apace to make life even more difficult, if not impossible, for Gypsies and Travellers living in England and Wales.

Born in the middle of the afternoon on a horse drawn wagon on the old A5; the big twelve wheelers shook my bed; ‘You can’t stop here’ the policeman said; ‘You’d better get born in someplace else’; move along, get along, move along, get along; Go, move, shift (MacColl, 1960). 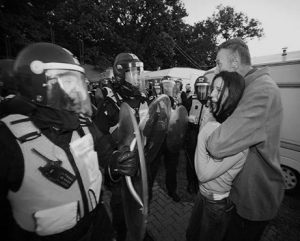 At Prime Minister’s Questions on 7th September 2011, John Baron, MP for Basildon and Billericay, asked the then Prime Minister David Cameron to join him “in sending a clear message to the travellers at the illegal Dale Farm site: we all hope they move off peacefully in order to avoid a forced eviction but, be in no doubt, the Government fully supports Basildon Council and Essex Police in reclaiming this greenbelt land on behalf of the law abiding majority.”  The Prime Minister (perhaps emboldened by the mass clearances of Roma camps instigated by his contemporaries in Italy and France at the time) responded that “he wholeheartedly supports Basildon Council and Essex Police and made the point that this was an issue of fairness in ensuring that the law is enforced”.

It would appear, however, that a peacefully managed ‘exodus’ was not at the forefront of the mind of Chief Superintendent Tim Stokes, of Essex Police who stated that given intelligence indicated that upwards of 2000 ‘anarchists’ would join residents in resisting on an eviction “We have to be prepared for the worst case scenario. We could face violent disorder […]. We believe there will be people on the site who are intent on violence, and  we must police them rigorously and robustly. […] Mistakes have been made by police forces in the past, but we are absolutely clear that our role is to prevent bailiffs breaking the  law as much as it is to prevent supporters and travellers acting illegally” (Essex Echo, 2011).

Forced evictions are a common experience for the Gypsies and Travellers.  However, what sets Dale Farm apart is the sheer scale of the site, its population of over eighty families, many with young children and elderly and infirm adults, and the high profile media campaign which Basildon Council, the local Burgh Council, and Tony Ball, its leader of the time, embarked on, pre the eviction.  A campaign which attracted interest from international media and, much to the chagrin of Basildon Council and Eric Pickles, the Secretary of State for Communities and Local Government of the time, brought the proposed eviction to the attention of high profile human rights activists and advocates such as Lord Avebury and United Nations Representatives.

Having followed the situation for years, on 12 April 2010 the United Nations Special Rapporteur on Adequate Housing sent an allegation letter to the Government of the United Kingdom, concerning the alleged threat of eviction at Dale Farm.   Inter alia, questions were asked that why, despite concerns raised by a High Court Judge, the Council determined to engage the private bailiff company Constant and Co. (Bedford) Ltd to undertake enforcement action: a company that “was allegedly responsible for the Twin Oaks eviction, in Hertfordshire in 2004, when chalets and private property were needlessly burned. It purportedly also acted as the agent for Chelmsford Borough Council at the Meadowlands eviction of 2004, which entailed burning of caravans and racial abuse against the residents”.  In response the Conservative administration of the time sent a communication asserting that the Special Rapporteur’s allegations were “not correct in all respects”, including a verbatim transcript of the most recent High Court Judgement as evidence to the fact (United Nations Human Rights Council, 2011).  And, in reply to the Special Rapporteur’s concerns vis a vis the prior actions of Constant & Co., the Government declared that whilst Basildon Council was aware of the records of the company it had assured the Government that if forced eviction was necessary, it would be carried out “as humanely as possible and having in mind the past history of undertaking this type of work” (Government of the United Kingdom of Great Britain and Northern Ireland, 2010).

In a vein similar to that of the Special Rapporteur, Lord Avebury, in debating the Localism Bill, raised the following in the House of Lords:

I particularly wanted to say something on the subject in light of the fact that we  are about to witness a case in which a council is deliberately making people homeless. I am talking about the case that your Lordships will be aware of where the local authority in Basildon is evicting 150 people from the Dale Farm Travellers’ site. […] I would like to know what the local authority in Basildon will do when these people find themselves without a home, because their homes will be taken away and put in storage. They will be left on the roadside. How will we deal with a situation of that kind? Why can we not take national action to prevent this crisis? (Hansard, Column 61, 2011).

However, this, and other questions he, and others, raised in the House, being overshadowed by the Prime Minister’s apparent support of Basildon Council’s proposed actions, had little impact on the local decision makers’ commitment to clearing the Dale Farm site. Emboldened by the support of central government representatives and indeed the Prime Minster himself, on 17th October 2011 Basildon Council Leader, Tony Ball, gave final proclamation on the matter to the international media gathered outside Basildon Council Headquarters:

Since last Wednesday evening the residents at Dale Farm have been living on borrowed time. I made it very clear following Mr. Justice Ouseley’s judgment that they should now leave peacefully and in a safe and orderly fashion. […] We are required to give 48 hours’ notice to three plots and that we will do, but the rest of the site will now be cleared at a time of our choosing.   Our job is now to clear this site in a safe and dignified manner, and this is what we intend to do (BBC England, 2011).

And thus, the scene was set for the forced eviction of the largest Traveller site in Europe, at the time.

At 7am on 19th October 2011 riot police with bailiffs in their wake forced entry into Dale Farm, a Travellers site established on contested greenbelt land (a former scrap yard) some ten years prior at Cray’s Hill, Basildon, Essex and so ‘Operation Cabinet’ commenced. On the instructions of the local authority, Basildon Council, over 80 families including children, the elderly and the infirm were to be evicted from the site. Electricity supplies would be cut (despite an awareness of some residents requiring power for essential medical equipment such as nebulisers) and all remaining possessions, including static (chalets) and mobile homes and caravans, were to be removed or otherwise disposed of. Upwards of 150 riot police would be deployed – the proverbial sledgehammer to crack a nut given that only around 100 residents and supporters remained, all others that could having left for fear of what lay ahead in the coming days.  Speaking on the day of the eviction, residents Mary and Nora Sheridan told of being awakened at dawn by an alarm “like an air raid siren”. They ran to the back gate as police were entering. “They were pushing things out of the way. When the boy was tasered, he was hopping – it was like an electric shock. I didn’t think the police could use Tasers; it was terrifying”. “Was what we’ve seen today Tony Ball’s peaceful resolution? They promised a peaceful eviction, but it wasn’t. […] It wasn’t peaceful at all” (Topping, 2011).

Later in the day, offering no commentary on the tasering of two individuals or the further six individuals being injured seriously enough to require hospital treatment, the Basildon Council Leader stated that whilst he “took no satisfaction from the eviction, it was the right thing to do” (Topping, 2011).

10th Meeting of the Council of Europe – Dialogue with Roma and Traveller Civil Society
November 27, 2020