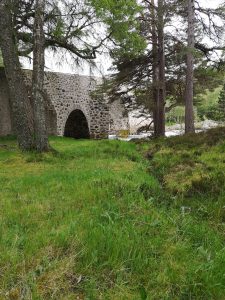 Up in the Highlands last weekend our first stop was Invercauld.   The big house, which has recently changed hands, has some quite fantastic beasts in its grounds – a Henry Moore style [perhaps even by the man himself] sits on grassland to the side of the house and a life size horse made of copper or a similar metal catches and bounces the rays of the sun on those rare days it shines and the land is transformed.

But, rather than the big house, it was the old bridge of Invercauld that was the reason for our stop.   Built in 1752 to carry ‘Wade’s’  military road over the river Dee, the bridge has stood the test of time, withstanding many floods and storms over the centuries.  Even the recent Storm Frank which, in washing away great swathes of land and roads brought the nearby settlement of Ballater to its knees, failed to cause any significant or lasting damage to this old woman of the hills. Like a rainbow following a downpour she arches high over the Dee keeping those crossing safe from stormy waters below and at ground level,  in calmer times, giving shade and shelter to the lone angler or the family of walkers alike.

Forward to Braemar and lunch at the newly refurbished Fife Arms Hotel.  The Flying Stag Bar, and indeed the whole ground floor of the hotel, is a veritable cornucopia of taxidermy and art works, all of which people are welcome to view.  No purchase necessary but those of faint heart and stomach might wish to partake of a small beverage to ‘calm the nerves’ after viewing a life sized stag with swan’s wings or the giant metallic spider complete with eggs.  Whatever a person’s view of the refurbishment it has certainly injected life back into the village and as importantly created jobs, something that the local people I spoke to welcomed.

Appetites sated and wallets a deal lighter, we headed home over Glenshee.  As we rounded a bend a few miles from Kirriemuir we came across a hedgehog wandering back and forth across the road. Also stopping to assist was a car coming the other way and three cars behind us.  Much conversation ensued.  ‘Do you think it is injured’, ‘No, it looks OK’, ‘Oh, it’s a wee hedgehog’, ‘What should we do?’ Should we call the SSPCA’, Do you have a signal’, and so on and so on and so on. I wondered if a committee would be formed and votes taken on a strategy or action plan.  Meanwhile, the rain had started and the hedgehog continued to wander back and forth.  As the discussions continued I picked up the hedgehog and placed it in the hedgerow where it settled.  Committees and such like are all fine and well but sometimes all that’s needed is just another old woman of the hills  keeping those crossing safe in stormy times.