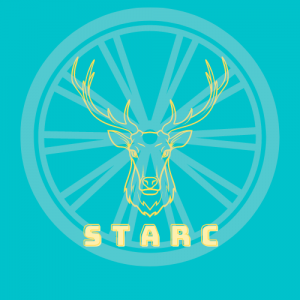 I was invited by the Scottish Traveller Action and Resilience Collective [STARC] to present on their behalf at this meeting.  As a founding member of the collective I was happy to do so.

My presentation, which focused on the role of the media in driving hate speech directed towards the Gypsy, Roma and Traveller communities, can be found below.  The presentation is followed by further questions and comments which I tabled. I would like to thank STARC for giving me the opportunity to represent them at this meeting. 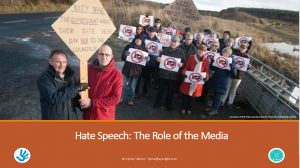 Hate Speech: The Role of the Media

I have chosen to focus on what I, and I am sure many others, see as one of the key drivers of negative social representations of Gypsies, Roma and Travellers –the media.

Misleading and unbalanced articles are a key driving force of negative social representations that foster fear, embed ‘otherness’ and enable the powerful to maintain boundaries – driving nomadic communities to degraded spaces on the peripheries of society.  This is unacceptable.

Not only is this type of journalism immoral and unethical, it also directly violates journalistic codes of conduct – inter alia the universal principles of truth and accuracy and fair reporting.

The image above was used on five separate occasions to report on the proposals to build a transit site in a remote rural area in the North East of Scotland.  The publication in question has a long history of negative reportage vis a vis Scotland’s nomadic communities, including the use of stock and ‘staged’ images, so the staging of a group of ‘enraged residents’ where no residential properties exist in the vicinity comes as no surprise to myself and others aware of this practice.  But, if the online stereotypical and prejudicial commentary on the articles are any measure of its impact then the publication would surely feel it was a good job done.

Sadly, this is not an isolated article or incident of immoral and/or unethical reporting in the mainstream media:

One year’s statistics of a recent four year long piece of research of the media’s reporting on the Gypsy/Traveller community undertaken by Article 12 in Scotland found:

195 articles over 12 months in 21 publications – an average of around 4 articles per week. This number of publications is disproportionate to the population size of the Gypsy/Traveller community living in Scotland – believed to be circa 20,000.

Only 0.5% – yes only 0.5% – reported on life from the perspective of a member of the Gypsy/Traveller community, indicating that the media is still focused on reporting from the view-point of the settled community.

Just 7% of articles were classed as positive, however, negative reporting still accounted for over half of audited articles, with a further 15% falling within the categories of discriminatory and racist – meaning that an overwhelming majority of articles portrayed the Gypsy/Traveller community in a negative and misleading light.  So, what are the key actions for change?

The media have a duty to report ethically and in an unbiased fashion, on all articles published.  I do not feel that this is the case where reporting on our nomadic communities is concerned.  The media have a powerful voice; I believe that, with willing, they could be instrumental in changing, rather than fuelling, negative social representations of our Gypsy, Roma and Traveller communities – that’s the ideal.  However, in the absence of willing, we should look to including a Prejudice Principle in national and international Press Codes of Conduct similar to that of the Press Council of Ireland’s which, inter alia, states that:

The press shall not publish material intended or likely to cause grave offence or stir up hatred against an individual or group on the basis of their race, religion, nationality, colour, ethnic origin, membership of the travelling community, gender, sexual orientation, marital status, disability, illness or age.

Turning to local, central  and international government and agencies:

The lack of adequate sites, both transit and permanent, and the resultant tensions between our nomadic and sedentary communities, have reached crisis point in some nation states; local, piecemeal, interventions have not and will not address this.  Arguably, only national and international directives will.  Consequently, I believe that national and international legislation on site provision is required, as a matter of urgency, to ensure that all states deliver on the accommodation needs of their nomadic communities.

These key actions are linked: a reduction in the number of ‘unauthorised’ encampments and settlements, a key driver of tensions, would arguably lead to less negative media coverage.   Ergo, without willing from all players there will be no change.

In terms of the protocols on cybercrime and so on – whilst states may have become signatories, the issue lies in implementation at ‘street level’.  Discretionary decision making by front line workers – Police and so on – is not always reflective of central government directives.  How can we address this?

There exists an issue with in-country reporting processes. The voice of the communities is often missing from these narratives therefore there is no real scope for measuring if the reports are accurate or reflective of the views and experiences of the communities.

They [the media] should know that they cannot hide behind the principles of  ‘freedom speech’.   Human rights are universal but they are not absolute.  One individual or group cannot enjoy their human rights at the expense of another.

As human rights duty bearers, national governments and supranationals must take the lead.  Deficit framing communities is not acceptable.  We do not need to be ‘given’ a place at the table; we need the resources to *take* our place.