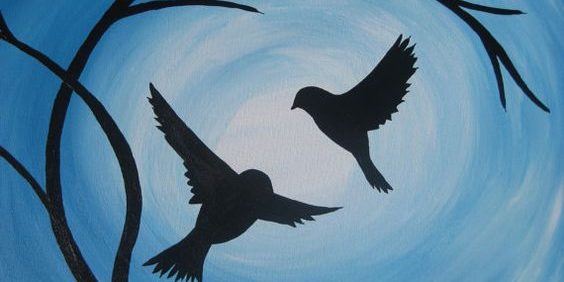 In the quiet of the night she rises slowly, careful in her movements lest she wake the man.  She moves to the curtainless window looking out to an ink blue sky.  Fiery Mars low in the East.  High above, Ursa Major’s seven stars shine bright in anticipation of the coming blue moon; a portent of change, revolution and rebellion.  ‘Tomorrow he will come’, she whispers to the night.

The man rises.  Guided by the dawning light he moves quietly across the room, careful lest he wake the woman.  He has heard her at the window these past  nights.  ‘Her heart is heavy with this great burden she carries.  But she believes in the old ways and will not act until he brings his message, may the gods let this be that day’.

She takes comfort from the familiar sounds of the man readying himself for a long day on the land. The clatter of the kettle on the stove, the sound of hot water poured into a flask, the unlocking of the door, the sigh of a pause as he pulls on his work boots and his final check that the door is firmly shut before he leaves her to her day.

She rises.  The window is feathered with early morning frost.  She sees shadow, light and movement beyond.   A perfect circle of light melts through the frosted façade revealing a figure at the old garden table, built by the man many years ago.  The figure looks up to the window and holds her gaze.  Closing her eyes, she feels strength and light passing to her.  She looks to the table to offer her thanks, but the figure has gone.

A bit of context: More than a decade ago the man and the woman spent time on Vancouver Island with a West Coast Salish First Nations family.  Whilst the First Nations man, Jorge, made a drum for the forthcoming birth of their first grandchild,  the First Nations woman, Tina, took them to an ancient forest and told them of the importance that they put on the elders of the forest – they are as important as and as deserving of the same respect afforded to human elders.  The two women spoke of spirit animals.  Tina told her that she could see that she had the Raven [the bringer of light] protecting and guiding her and if she ever had difficult decisions to make, she should wait for her spirit animal to give guidance.

10th Meeting of the Council of Europe – Dialogue with Roma and Traveller Civil Society
November 27, 2020